Our fellow patriot Jack McLain, Florida State Party Vice-Chairman, stepped off the field of this life and into eternity in the presence of the Lord Jesus Christ on Saturday, July 25th. Jack’s online obituary can be found at the Taylor & Modeen Funeral Home site. I encourage all who have been touched by his life and work to sign the online memory book. Please pray that the Holy Spirit comfort his wife Lois and their family, and that He fill their hearts with rejoicing: Jack is now with his Savior.

The premiere night was a success with 173 attendees!  After a satisfying theater run Beyond the Mask will be available on Blu-Ray and DVD on September 8.  Constitution Party of Georgia supporters can pre-order the movie at a 20% discount (the party does not benefit from sales). 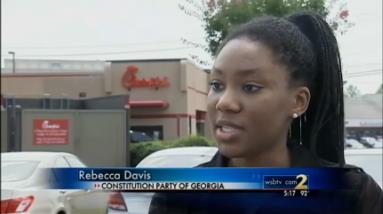