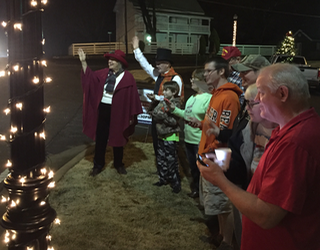 The Political Significance of Christmas

In their effort to make a point, those who discuss law and government and politics for a living often miss the most crucial – the most critical point of all. So, as we celebrate Christmas, this is a good time to take a deep breath and revisit first principles.

We should remember the political significance of Christmas. Now don’t get distracted by arguments that early Christians latched onto a pre-existing pagan holiday to establish the date of Christmas. That may be true, but it is a distraction from what’s truly important. The important thing is the birth of the Savior, Jesus Christ.

This week marks a Christian holiday that figures prominently in America’s history – Thanksgiving Day.  Celebrations typically include family gatherings and feasting.  For some the day is bittersweet due to loved ones who have passed away since the last gathering.  The past few weeks my heart has been filled with a familiar song of praise from King David of Israel:

Oh give thanks to the Lord, call upon His name;
Make known His deeds among the peoples.
Sing to Him, sing praises to Him;
Speak of all His wonders.
Glory in His holy name;
Let the heart of those who seek the Lord be glad.
(1 Chronicles 16:8-10)

Let us follow the example of our nation’s forefathers and focus our Thanksgiving on the One who deserves our thanks and praise – God our Creator who has blessed us with life and liberty.

Hey Conservatives! How’s That Paul Ryan Vote Working Out for You?

Prior to and immediately following the vote for Paul Ryan (R-Chamber of Commerce) to be the new Speaker of the House, I went on an Internet/social media rant fest decrying the shortsightedness of conservative House members, particularly members of the Freedom Caucus, who were willing to settle for Ryan, presumably for the sake of getting the Speaker selection over with. See here, here and here.

This has been a tumultuous month for Republican Party politics.  Daniel Horowitz commented, “the GOP-led House passed a budget bill and debt ceiling increase that countermands every principle they campaigned on when pursuing majority control of that chamber in 2010.  The policy and political outcomes of this vote will be far reaching and gravely consequential.”  The subsequent vote by the Senate and election of Paul Ryan as Speaker of the House are the latest victories of the ruling American duopoly.  And with this action the hemorrhaging of the GOP, which has been growing in the grassroots since G.W. Bush’s administration, has now publicly moved into the national leadership of the GOP itself.