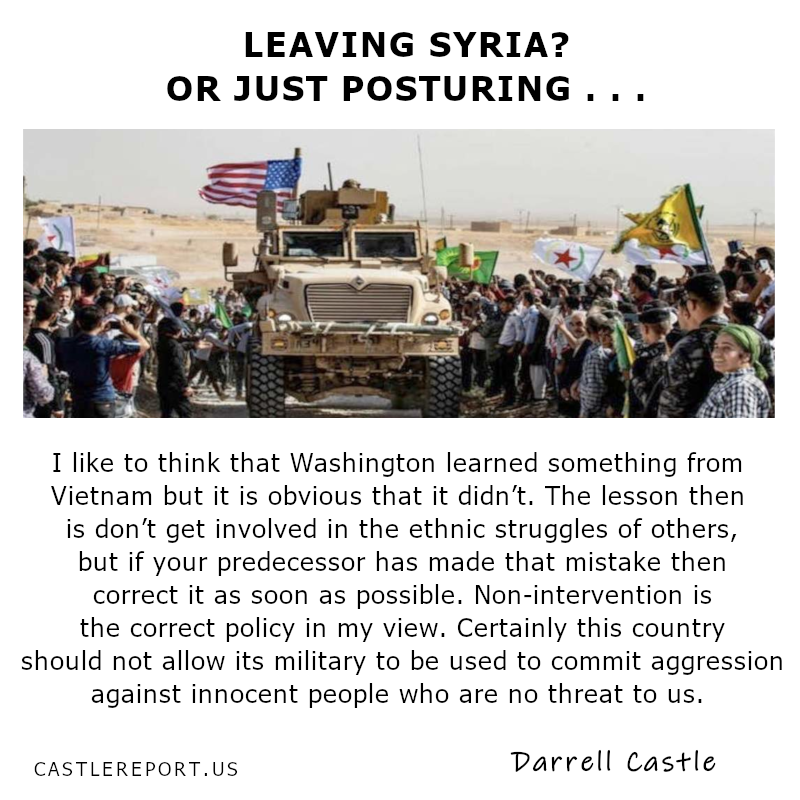 Darrell Castle talks about Syria and President Trump’s recently announced decision to pull US troops from that country.

Hello, this is Darrell Castle with today’s Castle Report. Today is Friday, October 11, 2019, and on this Report I will be talking about Syria and the President’s recently announced decision to pull U.S. troops from that country, but first I want to remind you that next Friday I will be attending the Constitution Party National Committee Meeting so there will be no Castle Report next week. God willing I will be back with you Friday, October 25th. (Continue reading transcript)

For Constitution Day 2019 we present "Overview of America", which shows a straightforward explanation of government systems, basic economics, and timeless moral principles. Because of following them, America became the most unique and prosperous country in history.

The State of Georgia is planning to spend over $100 million to replace the current electronic voting machines with Dominion Voting System’s Image Cast X electronic ballot marking device (BMD) which accumulates votes that are embedded in bar codes the voter cannot verify. This new system also has a variety of security, auditability and legal issues and was recently rejected for use by the state of Texas.

Georgia law provides that ten or more voters may demand a reexamination of a voting system for the Secretary of State to determine whether it is secure and meets the Election Code (§21-2-379.24). Concerned voters are petitioning Georgia Secretary of State Brad Raffensperger and Georgia election officials to reexamine the proposed system. The Constitution Party of Georgia (CP-GA) has joined other organizations in demanding a diligent, responsible and honest re-examination as to whether the Image Cast X voting system meets the legal requirements according to state law.

ATLANTA, GA – Thursday Judge Amy Totenberg of the U.S. District Court of North Georgia banned the current Direct Recording Electronic (DRE) voting systems from further use in Georgia elections beginning in 2020. The DRE system produces results that cannot be verified by the voter, audited by election officials or recounted for candidates. The court found the system impairs Georgia voters’ Constitutional right to vote in any federal election.

by the Constitution Party National Committee –  4 May 2019 – Milwaukee, Wisconsin

Whereas, The American Declaration of Independence recognizes the foundational and timeless principle that governments are instituted among men to secure God-given rights, and,

Whereas, the right of self-defense, defense of the family, and defense against tyranny, is conferred upon the individual and the community by our Creator, and,

Whereas, the responsibility to safeguard life, liberty, and property, as well as to help preserve the independence of the nation is bestowed upon mankind by our Creator, and