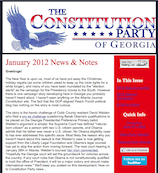 The story is the heroic challenge of Cobb County resident David Welden who filed a pro se challenge questioning Barak Obama's qualifications to be placed on the Georgia Presidential Preference Primary ballot. Welden's argument is simple: the Supreme Court has defined "natural-born-citizen" as a person with two U.S. citizen parents, and Obama admits that his father was never a U.S. citizen. No Obama eligibility case to has ever addressed this specific issue. Most likely the reason why you haven't heard about this lawsuit is that Welden's case is now getting support from the Liberty Legal Foundation and Obama's legal counsel has yet to stop the action from moving forward. The next court hearing is January 26th in Atlanta. Welden's counsel Van Irion commented, "Hopefully the Georgia court will set the groundwork for victories across the country. If any court rules that Obama is not constitutionally qualified to hold the office of President, it will be a major victory and should make international news." We'll keep you posted on this development. Now on to Constitution Party news...

The countdown for the 2012 State Convention has begun. This year's theme is "The Rules Have Changed: Building upon Eternal Principles." Party supporters and voters disgusted with "business as usual" will meet on Friday February 10 and Saturday February 11 to hear encouraging speeches from leaders, find fellowship with others who are concerned about our state and nation and want to work with like-minded citizens, and work on the party's platform and resolutions. In addition to the outstanding speakers, this year's convention includes a Friday evening dinner event.

Our keynote speakers for 2012:

Steve Deace - Christian talk show host whose nationally syndicated talk show is heard on WGKA-AM Atlanta. His latest book, We Won't Get Fooled Again: Where the Christian Right Went Wrong and How to Make America Right Again, is an expose of the Religious Right and Conservative movement in America, where it has failed, and how to once again restore righteousness back to America.

Dr. Jody Hice - President of Let Freedom Ring Ministries; national talk show host who is heard on stations in Toccoa Falls, Helen, and Lilburn; and 2010 candidate for Congress in the 7th District. It's Now or Never: A Call to Reclaim America is his latest book. In it he informs fellow patriots about issues involving culture, religious liberty, and constitutional abuse and inspires us to get involved in the battle to restore our nation's godly heritage.

Also speaking will be Coastal Empire Constitution Party coordinator and former Chatham County Commissioner Jeff Rayno, Georgia Right to Life Field Director Mike Griffin, and others.  Ian Bowers of Austell will portray Patrick Henry and provide a dramatic presentation of his "Give Me Liberty of Give Me Death" speech.

All sessions and keynotes are open to the public, so invite your family, friends, and folks who share your concerns about politics and government.

High Point Christian Academy, the school that meets at First Christian Church, is a proud sponsor of the 2012 State Convention. HPCA staff will provide childcare services at $25 for the full day session per child or $4 per hour.  On Friday grade school children will be integrated into the school's activities.

Reservations for childcare should be made by Wednesday, February 1by calling HPCA at (678) 289-9701.  On site requests for childcare will be handled on a staff- and space-available basis.

Comfort Suites Hotel Stockbridge has been selected as the host hotel for the Constitution Party State Convention. A block of rooms will be held for convention attendees through Wednesday, February 1; rates are $79.00 for a King Suite and $89.00 for a Double Suite (plus the applicable taxes). The hotel is the newest in the area with plenty of shopping and dining nearby.  The hotel is located at 3540 Cameron Parkway, Stockbridge, GA 30281 and can be reached at (770) 507-0444.

Party members are encouraged to submit suggestions for resolutions and changes to the state and national party platform. Members can request a copy of the draft 2012 state platform by contacting Ronne Haag, State Secretary, at [email protected]. All items must be submitted to the State Secretary in Microsoft Word format by February 1. No other formats will be accepted for submission.

Platform submissions must include the entire plank of the platform being changed, even if only a portion is modified, as well as the constitutional provision upon which it is based. Highlight changes and additions with bold type and use "strikethrough" formatting for deletions.

Resolution submissions should follow the standard format of statements of fact (whereas) followed by the call to action (resolution statement). It is strongly encouraged that the statements of fact include the constitutional provision(s) or law(s) on which the resolution is founded. The call to action must have specific, actionable steps on which party supporters, candidates, or elected officials can perform. Please note if the resolution is to be considered for either the state or national convention.


Agenda items will include:

Georgia delegates will be nominated at the state convention in February and assigned to standing committees (platform, credentials, and rules).

See the national party website for the full agenda: constitutionparty.com