At first appearance, the serious allegations of sexual abuse against Roy Moore are devastating.  However, unlike many of the recent revelations where the accused acknowledged their guilt Moore denied the allegations.  How do we respond?

The unacknowledged and denied allegations at this point are unproven and untested; we have a system of justice that protects citizens by assuming innocence until proven guilty of crime in a court of law.  Before we pass judgement let us put ourselves in the shoes of the accused.  Do you consent to mob justice?  How would you respond if you were the victim of a tsunami of slander that assassinated your character and damaged your reputation?

Wisdom dictates a level-headed response.  If Roy Moore is indeed guilty then allow our justice system to give the accusers their day in court.  If justice prevails and Moore is proven guilty then he must bear the punishment.  Until then people – especially Christian leaders – must beware of the mob mentality and be ready to call into question the motives of those who would defame the character of Roy Moore.  Let us use a right and unbiased standard in judging others, and not give our approval to the powerful voices that through repeated accusations and appeals to rushed judgment seek to plunge our constitutional republic into darkness.

The following statement was made by the Alabama Constitution Party (ACP) in September:

The Alabama Constitution Party has long stood for the principles laid out by our founding fathers in the Declaration of Independence, and have fought vigorously in defense of the Constitution. We understand that our Creator has endowed each of us with unalienable rights. No other candidate for the vacant senate seat left behind by Jeff Sessions appointment knows this more than Roy Moore. Moore has time and time again, in the face of certain reprisal from enemies of our Constitution, stood to defend the rights of the people against the approaching globalism doctrine. Having been removed twice from elected office for standing up for the citizens of Alabama against the onslaught of the socialist movement, which is bent on making government our overseer and our god, the people of Alabama should send a clear message. That message should be Alabamians will decide who represents us in the Senate, not crooked DC establishment propagandists. No one in the Senate today knows more about the Constitution and the application of it as the limiters of government than Moore. Putting principal over party it is hereby the decision of the Alabama Constitution Party to officially endorse Roy Moore for US Senate.

The Constitution Party of Georgia agrees with the ACP in its assessment of Roy Moore’s character and understanding of the Constitution, as well as how he was tested through trials and defeats.  We encourage our supporters and all fellow citizens who wish to protect our God-given right to life, liberty and the pursuit of happiness to support our efforts to help our endorsed candidate win in December.

A number of Christian and Jewish leaders from Alabama and around the country met in Birmingham, Alabama on November 16th to stand in solidarity with Roy Moore, addressing his character, his competence, and his courage in fighting for the citizens of Alabama.  Then Roy Moore addressed the audience and the media.  We provide a link to the unfiltered coverage of the event thanks to C-SPAN – because you deserve to hear the other side of the story. 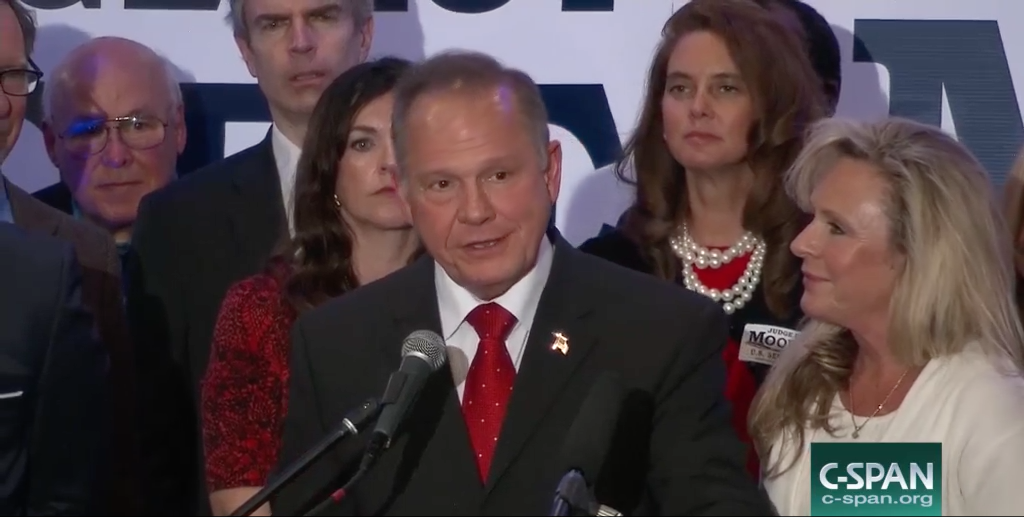